Brain imaging with SPECT and PET

In patients with dementia, anatomical imaging frequently shows little or no change. Characteristic patterns of functional involvement using SPECT and PET can, however, enable more accurate differentiation of these forms of dementia (Fig. 1). Early detection and accurate determination of the underlying cause of dementia provide information that is useful for patient management, and has prognostic implications.2


Alzheimer’s dementia (AD) classically shows decreased function in the tempero-parietal regions bilaterally, although this may be unilateral during the early stages of the disease. Posterior cingulate gyrus and precuneus involvement are recognised as early hallmarks. As cases advance, the frontal cortex also becomes affected. Typically, the primary sensori-motor cortex, visual cortex, subcortical structures, e.g. the basal ganglia and thalami, and cerebellar lobes are spared. Currently, diagnosis of AD is based on clinical criteria, but there is a move towards complementing diagnostic criteria with molecular and neuro-imaging markers. Early detection of AD is likely to become increasingly important in genetically high-risk individuals.

Vascular dementias can result in lesions involving the cortex, subcortical structures or cerebellum. These types of dementias are normally asymmetric, and classically involve border-zone areas of cerebral arteries. Fronto-temporal dementias are characterised by frontal and/or temporal cortex hypometabolism, with relative sparing of the parietal cortices and precuneus. Lewy body dementia (LBD) can be distinguished from AD based on occipital hypometabolism, and/or abnormal striatal DAT binding.3

Patients with refractory focal epilepsy, who are candidates for surgical resection of the epileptogenic focus, frequently benefit from SPECT and/or PET imaging.4 The planning of surgery in epileptic patients requires close collaboration between the disciplines of neurology, neurosurgery, radiology, and nuclear medicine. MRI is essential in the management of these patients, although not all epileptogenic foci can be accurately localised using this modality and, conversely, not all anatomical foci are the cause of a patient’s seizures.

The ability of perfusion brain SPECT to capture a snapshot of brain perfusion in a relatively short time frame enables ictal SPECT to localise epileptogenic foci. Injection of a radiopharmaceutical as soon as possible after seizure onset demonstrates a focal area of increased activity at the site of the epileptogenic area. In comparison, an interictal scan (obtained between seizures) shows no abnormalities or even an area of decreased activity at this site. The detection of the epileptogenic focus is further enhanced using Subtraction Ictal SPECT Co-registered with MRI (SISCOM), which requires subtraction of the interictal SPECT from the ictal SPECT, and superimposing the images onto anatomical MRI for accurate anatomical localisation of the lesion (Fig. 2).

Fig. 2. Scans in a patient with refractory focal epilepsy with an epileptogenic focus, showing increased perfusion on ictal SPECT localised to the posterior aspect of the right frontal lobe on SISCOM.

Focal interictal hypometabolism on FDG-PET has also been shown to correlate with seizure foci (Fig. 3). Hypometabolic areas on PET often extend well beyond the true epileptogenic zone. PET can therefore not be used to refine surgical borders, but is useful for guiding intracranial electrode placement. 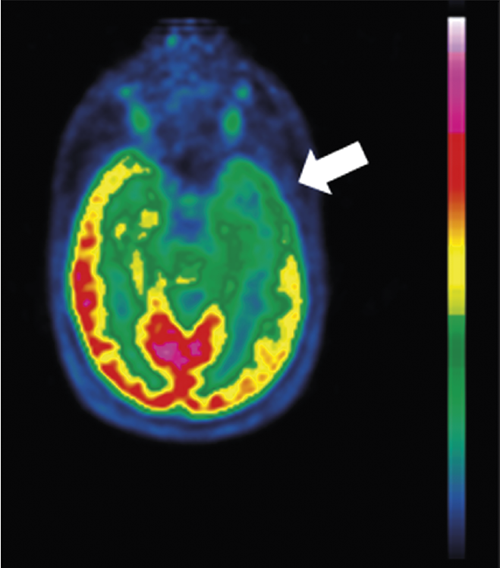 Mild traumatic brain injury (mTBI) typically involves loss of consciousness, loss of memory, alteration in mental state, or focal neurological deficit. Commonly, it is associated with headache, impaired thought processes, memory problems, attention deficit, mood swings and frustration. Abnormalities are more frequently found in mTBI patients when SPECT is performed than with MRI and CT scans.5 Hypoperfusion in the frontal and parietal lobes is common (Fig. 4), although the basal ganglia, as well as the occipital, parietal and cerebellar areas, can also be affected. SPECT has a high sensitivity and negative predictive value for mTBI, and a normal study is predictive of good recovery.5 However, given its limited specificity, SPECT alone is not enough to diagnose mTBI.

Brain SPECT and PET have a well-established role in facilitating the diagnosis of neuropsychiatric involvement in systemic lupus erythematosus (SLE). Varied and often subtle clinical manifestations make this a challenging diagnosis. Anatomical MRI is frequently normal or does not provide an explanation for the signs and symptoms, in which case SPECT or PET imaging is appropriate.6 These typically reveal a pattern of multifocal perfusion deficits, and are useful, objective tools to assist clinicians in selected cases (Fig. 5). These modalities have a good sensitivity, but a modest specificity.

Fig. 5. A patient with SLE presented with clinical features suggestive of neurolupus. SPECT shows multiple areas of hypoperfusion in the left frontal and bilateral parietal cortex consistent with neuropsychiatric SLE.

The clinical evaluation of patients with parkinsonism can be extremely challenging, even in expert hands. The distinction between Parkinson’s disease (PD), other parkinsonian syndromes such as multiple system atrophy, progressive supranuclear palsy, corticobasal degeneration and LBD, and other conditions such as essential tremor, has important implications for treatment and prognosis.

SPECT and PET imaging of DAT, dopamine receptors, brain glucose metabolism, and myocardial autonomic function are increasingly used to assist with these difficult distinctions.3 Most of these modalities are already available in South Africa. DAT imaging reveals reduced presynaptic neuronal degeneration in PD and other parkinsonian syndromes, even when clinical features are subtle, while conditions such as essential tremor have normal striatal DAT density (Fig. 6). 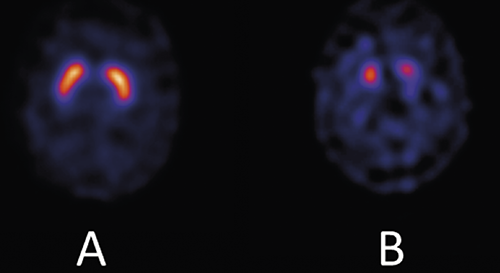 Fig. 6. Scans of two patients with parkinsonism. In one case, DAT SPECT shows normal striatal DAT density, virtually ruling out Parkinson’s disease or other causes of presynaptic dopaminergic neuron degeneration (A). The second scan shows a patient with Parkinson’s disease with marked loss of striatal uptake, particularly in the putamen, and a high level of background activity (B).

In this brief overview the main indications for brain SPECT and PET are discussed. These imaging modalities are available in most major centres in South Africa and are frequently required for the optimal management of a diverse group of neuropsychiatric conditions.