A wide array of neurological abnor-malities occur in childhood, with a significant proportion of these attributable to congenital causes. The classic congenital neurosurgical condition is open spina bifida or myelomeningocele, but this is just one example of a wide spectrum of conditions commonly referred to as neural tube defects or, more correctly in clinical practice, as dysraphism.

This is a broad term used to describe a range of conditions that arise owing to errors in the early development of the nervous system, either during closure of the neural tube (also called primary neurulation, from conception to day 28) or subsequent embryological development (or secondary neurulation).

This group of malformations is characterised by defects of the skull resulting in herniation of the brain. They are classified according to their anatomical location, with the majority occurring either occipitally or frontally (Figs 1 and 2). Clinical presentation depends on the location, but features include a skin-covered sac, which may increase in size on Valsalva. Surgical closure is the mainstay of treatment. Often, patients are not referred until very late owing to a mistaken belief that the condition will be fatal. 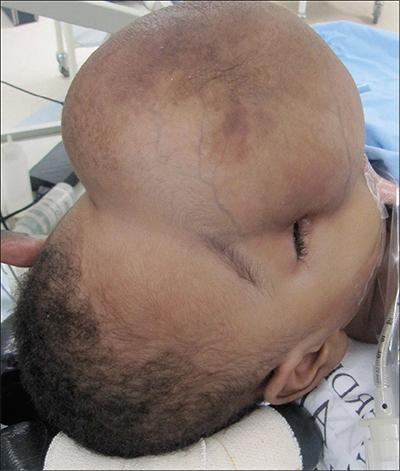 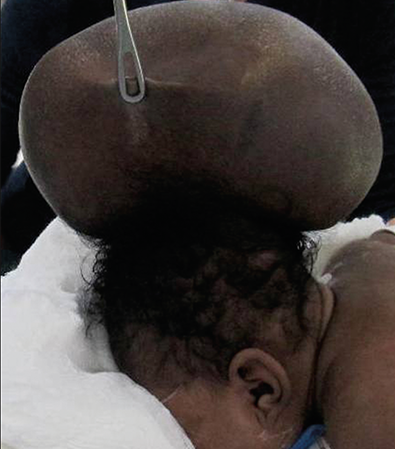 Congenital cranial dermal sinuses are midline tracts lined by squamous epithelium. The depth of extension is variable, with most lesions located occipitally, close to the union. These abnormalities should be borne in mind when children present with recurrent meningitis, remembering that they may be found anywhere along the midline from the tip of the nose to the gluteal cleft.

Myelomeningocele is caused by defective closure of the neural tube, a process that is completed within 28 days of conception. The incidence of myelomeningocele in live births is 1 - 2/1 000 (0.1 - 0.2%), with marked regional variation. Prenatal diagnosis is possible with maternal serum alfa-fetoprotein, confirmed by ultrasound and amniocentesis.

Recently, a significant decline has been noted in many parts of the world, largely as a result of improved maternal nutrition and periconceptional vitamin supplementation, particularly folate. The simple primary prevention strategy of folate supplementation has been shown to reduce the incidence by 80%. There is mandatory food fortification in South Africa, but clinical experience has suggested that this is insufficient and anyone who may become pregnant must consume supplemental folate before conception!

Clinically, myelomeningocele presents as a fluid-filled sac of varying size, which usually occurs in the lumbo-sacral region, but can occur anywhere along the midline spinal axis (Fig. 3). It contains neural tissue with a delicate meningeal layer. 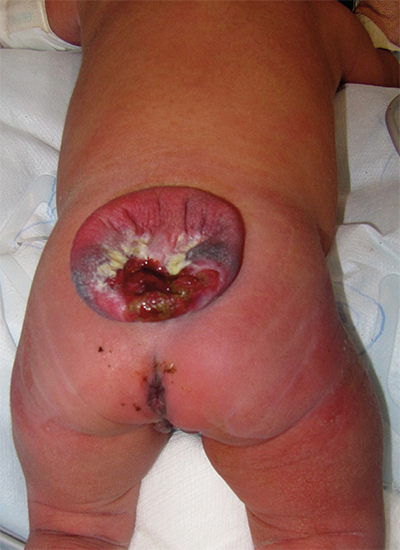 
There is invariably some form of neurological deficit in the lower limbs, ranging from paraplegia to mild weakness, depending on the level and size of the lesion. These are often accompanied by spinal and lower limb deformities. Hydrocephalus is seldom present at birth, but occurs in 75 - 85% of cases.

Once diagnosed, the infant with a myelomeningocele must be referred to a specialist centre for closure within 24 hours. Surgical treatment involves prompt closure of the lesion, usually followed by insertion of a ventriculoperitoneal shunt.

This is a group of disorders resulting from malformation of the spinal cord during secondary neurulation. This group comprises many different, but individually rare, variants, but the key feature is that almost all have obvious cutaneous stigmata including subcutaneous lipoma, hypertrichosis (a hairy patch), caudal appendage, capillary haemangioma or dermal sinus (Fig. 4). It is important to differentiate the rare dermal sinus, which always needs further investigation, from the much more common sacral pit or dimple (Table 1). 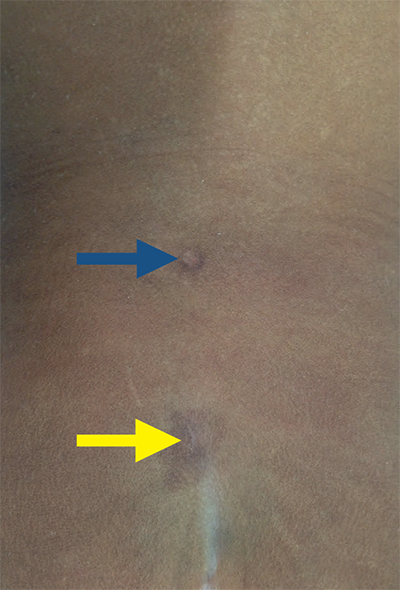 Surgical indications are patient specific and depend on the natural history of the disease, but usually involve untethering of the spinal cord.

Craniosynostosis occurs in 1 in 2 100 children. The condition involves premature closure of the cranial sutures, either single or multiple, and may be simple or part of a syndrome (Table 2). The most commonly encountered single suture synostoses are the sagittal suture (scaphocephaly) and the coronal suture (plagiocephaly).

This is the most common type of craniosynostosis. The skull is typically elongated with a palpable bony ridge, usually with frontal and occipital bossing (Fig. 5). The cranial base, orbits and face are usually spared. Infants with scaphocephaly should be referred to a specialist centre before the age of 6 months. 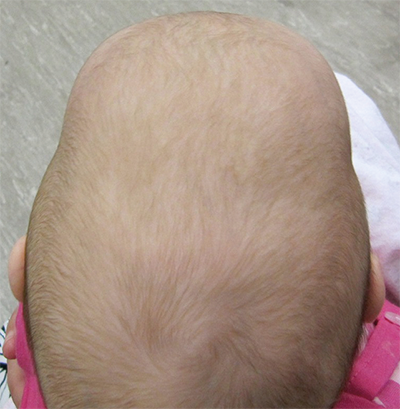 Premature fusion of the coronal suture may occur unilaterally (anterior plagiocephaly) or bilaterally (brachycephaly). Unilateral fusion is usually non-syndromic. Coronal suture synostosis is accompanied by flattening of the ipsilateral forehead, compensatory contralateral bossing, shortening and upwards displacement of the greater sphenoid wing with a flattened vertically elongated orbit (harlequin eye) (Fig. 6). There is also a facial scoliosis due to ipsilateral involvement of the nasal bone, zygoma and maxilla. 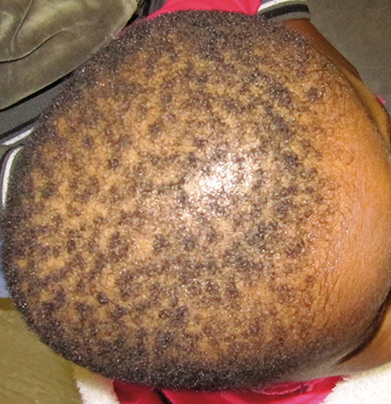 
Children diagnosed with anterior plagio-cephaly should be referred early, as surgery is optimal if performed before the age of 1 year.

These conditions have specific neurological findings with associated cutaneous lesions, often with dysplasia of other organ systems. The most commonly recognised conditions include neurofibromatosis, tuberous sclerosis and Sturge-Weber syndrome.

NF remains the most common and surgically important of the neurocutaneous disorders. NF can be divided into two distinct types – NFI, which accounts for around 90% of cases, and NFII. The diagnosis is made on clinical grounds (Fig. 7), using the diagnostic criteria listed in Table 3. 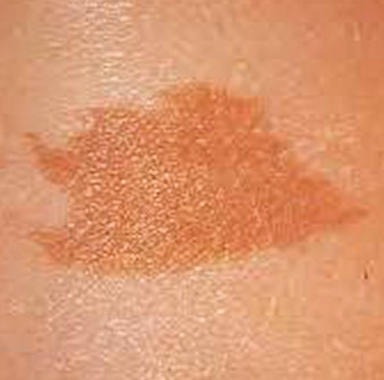 TS is characterised by hamartomatous lesions involving multiple organs. In the brain they usually manifest as cortical tubers and/or subependymal giant cell astrocytomas. The most common clinical features include intractable seizures, developmental delay, behavioural impairment and raised intracranial pressure due to obstructive hydrocephalus. 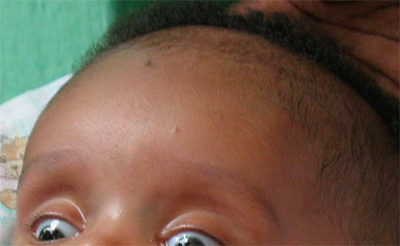 
‘Congenital hydrocephalus’ is often associated with myelomeningocele, but may also be caused by aqueduct stenosis, Dandy-Walker malformation, intrauterine infection, germinal matrix haemorrhage and rarely by an X-linked inherited disorder. The classic clinical sign is increasing head circumference (Fig. 8), while other clinical features include:

While neuro-imaging is extremely helpful in planning the management of the abovementioned conditions, virtually all can be diagnosed on clinical grounds at the primary care level, enabling prompt referral for definitive management.