Beyra Rossouw is a paediatric intensivist at Red Cross Children’s Hospital, with a special interest in cardiac critical care.


This article reviews the pathophysiology of cardiorespiratory problems in children with cardiac shunt lesions. The close anatomical and physiological relationship of the heart and the lungs explains why disease in one system will affect the other.

Flow across the cardiac shunt depends on two factors:

• size of the defect

• pressure difference between the two chambers of the shunt.

Pressure difference is the most important factor determining the amount of flow across the shunt. Blood will always flow from the high-pressure chamber to the low-pressure chamber. Therefore, in the normal heart shunt flow will be from the left to the right heart. The larger the pressure difference between the chambers the more blood will be shunted across the defect.

Murmurs heard in shunt lesions are often generated by turbulent blood flow across a valve. For example, the ASD murmur is not the flow across the ASD that you hear but rather the turbulent flow over the pulmonary valve caused by a relative pulmonary stenosis (PS). A large VSD will have excess blood returning to the left atrium (LA) and turbulent flow over the mitral valve will cause a relative mitral stenosis (MS). This is heard as a mid-diastolic rumble.

The heart chamber directly downstream from the shunt will become volume loaded and dilate.

The term ‘cardiac failure’ is a misnomer in cardiac shunts. Myocardial contractility is well preserved until end-stage disease, usually only in late childhood or adulthood. When the LV myocardium contracts a large amount of the stroke volume (SV) is ejected through the shunt to the right heart and only the remainder of the SV is ejected into the aorta. The implication is that too little SV reaches the systemic circulation, giving rise to signs of poor perfusion and stimulation of the neuroendocrine response.

The neuroendocrine response includes an increased discharge of the sympathetic nervous system and activation of the renal renin angiotensin system. This is a compensatory mechanism. The aim is to increase cardiac output (Q) by increasing the heart rate (HR) and to maintain blood pressure (BP) by vasoconstriction (R) and fluid retention: Q=HRxSV, BP=SVxHRxR.

Large cardiac shunts (Qp:Qs >1.5) are at risk to develop PHT. Patients with a large VSD or PDA transmit systemic pressure across the shunt during systoly and develop PHT in childhood. Patients with an ASD usually only develop PHT as adults due to low pressure flow across the ASD only in diastoly. Clinical features of PHT are shortening of the systolic murmur, accentuation of the second heart sound and RV hypertophy.

Abnormal lung mechanics of an over-circulated pulmonary vascular bed include a decrease in lung compliance, an increase in airway resistance, increase in work of breathing, pulmonary oedema, atelectasis, V/Q mismatch and pulmonary hypertension.

The increased lung stiffness (decreased compliance) is attributed to an increase in interstitial oedema and an increase in actual blood volume in the lungs. A negative correlation exsists between lung compliance and the magnitude of pulmonary vascular engorgement as well as the radiological degree of plethora.

Engorged vessels and volume-loaded heart chambers can cause external bronchial compression. Common sites of obstruction are the left main bronchus and right middle bronchus. These bronchial sites are compressed between a dilated left atrium posteriorly and dilated pulmonary artery or PDA anteriorly. The peak incidence is in infancy, when the bronchial cartilage is soft. Chronic compression can lead to bronchomalacia causing morbidity long after surgical repair of the cardiac lesion.

Complete obstructed airways lead to segmental atelectasis, most commonly seen in the left lower lobe. Partially obstructed airways develop a ball-valve effect when gas takes longer to escape during passive exhalation. If infants are tachypnoeic the expiratory gas flow time is too short for alveolar emptying, leading to airtrapping.

Lung infection and hypoxia-related inflammation play a role in breakdown of the endothelial integrity and capillary leak develops. Inflammation can disrupt the activity of pulmonary sodium pumps that create an osmotic gradient to clear fluid from the alveoli. It can disrupt the interstitial matrix integrity, enhancing interstitial oedema. The end result is microfractures in the capillary-alveolar interface, leading to an increased risk of pulmonary oedema.

Pulmonary vasoconstriction occurs in response to hypoxia and local inflammation. This is a physiological response to redistribute blood flow to the well-oxygenated lung areas in order to limit V/Q mismatching. Chronic over-circulation leads to structural changes and later PHT. Longstanding PHT will increase RV afterload and RV failure may develop.

To overcome the increased airway resistance and stiff lungs, infants need to generate high inspiratory transpulmonary pressures. Clinically this manifests as tachypnoea, intercostal recession and subcostal recession. In significant airtrapping the diaphragm is pushed down and flattened instead of being in its normal concave position. Diaphragm contraction becomes less efficient in a flattened position. This is clinically seen as subcostal recession with contraction of the horisontal diaphragm fibres inplanted to the lower ribs. A chronically flattened diaphragm causes permanent deformity of the lower ribs, known as Harrison’s sulci. The infant may compensate by using abdominal and intercostal muscles as an active forced expiration to empty the lungs. However, this extra muscle action tires the infant and breathing may become ineffective, especially at fast breathing rates.

The energy cost of breathing is high, with consequent failure to thrive. Added to the high energy costs, the caloric intake is often low. Infants become too dyspnoeic and tachypnoeic for coordinated breathing and feeding. They simply cannot keep up with the energy demand and start losing weight.

Aspiration can be particularly problematic in cardiac shunt patients. A dilated left atrium compresses the oesophagus, causing reflux and aspiration. Aerophagia from dyspnoea and difficult feeding can also contribute to aspiration. Infants with cardiac lesions should be assessed for other congenital abnormalities, for example tracheo-oesophageal fistula in VACTERL malformations, or swallowing incoordination in hypotonic Down syndrome infants.

Children with cardiac shunt lesions are at risk of contracting lower respiratory tract infections (LRTIs). Respiratory syncytial virus (RSV) is the most important cause of severe LRTI among infants. It causes bronchial epithelial sloughing and intraluminal secretion production, leading to aitrtrapping and hypoxia. RSV will accentuate the pathological pulmonary processes of cardiac shunt lesions, leading to increased mortality and morbidity.

Clinical examination, together with special investigations, should be used to assess the haemodynamic effect of the shunt. Echocardiographic size of a shunt means little without the clinical and haemodynamic context for the particular baby. For instance, a 5 mm VSD would not be significant in a 10-year-old but will have significant haemodynamic consequences in a baby of 3 kg.

• Plethora from pulmonary over-circulation seen as: 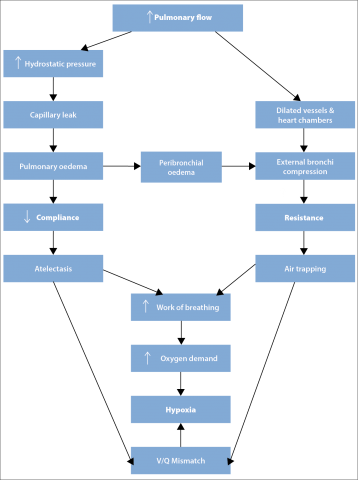 Medical treatment of cardiac shunt lesions – ‘Lasix for
the lungs’

The mainstay of cardiac shunt treatment is diuresis. Once pulmonary over-circulation is recognised clinically and radiographically, diuretics should be started to reduce lung fluid. In patients with problematic lungs it is important to diurese well by using adequate doses and combination drugs. A target urea range of 5 - 8 mmol/l can be achieved by using the diuretics 6-hourly instead of 12-hourly, as long as the creatinine stays within normal range. With more frequent doses one has to monitor sodium, potassium, magnesium and calcium renal losses. Myocardial function is highly dependent on optimal electrolyte levels, especially in infants. Spironolactone is often added to counteract potassium losses but can also help with myocardial remodelling. Thiazides are used in neonates because they cause less renal calcium loss and therefore have a lower risk for nephrocalcinosis.

Food should not be restricted in infants with cardiac lesions and failure to thrive. Once children are malnourished, perioperative morbidity and mortality increase. Rather increase diuresis but keep caloric intake high to maintain growth. Close collaboration with the dietician is recommended to help with optimal caloric supplementation.

Reduce the metabolic demand by treating fever actively; start nasogastric feeds if infants are too tachypnoeic to feed and ensure the infant remains normoglycaemic. Aim to keep the infant comfortable with the parent close and limit crying spells.

Oxygen therapy should be used with caution when children present with respiratory symptoms as it can worsen the pulmonary flooding. Oxygen therapy will vasodilate the lungs and create a larger pressure gradient across the shunt. Therefore more blood will be flooding the lungs, perpetuating the vicious cycle of respiratory over-circulation. With large shunts aim to keep saturation at 88 - 94% as long as the perfusion is good and the child is not acidotic. If the infant is haemodynamically stable, one should try to wean oxygen as soon as possible even though there may still be mild respiratory distress signs.

Non-invasive positive pressure ventilation (NIPPV) at low FiO2 settings can be used to reduce the work of breathing. Provide PEEP to recruit areas of atelectasis, reduce alveolar oedema and reduce the metabolic demand. Rather use NIPPV than increase the FiO2 when the infant shows worsening respiratory distress signs.

Infants presenting with an intercurrent illness and poor perfusion should first receive a 5 - 10 ml/kg crystalloid bolus. They often do not feed well and may develop increased insensible fluid losses and/or gastrointestinal losses with infections. Perfusion should be reassessed immediately after the fluid bolus.

Dobutamine has moderate inotropic and chronotropic activity due to β1 receptor stimulation. It will augment SV and increase HR but can cause potential harm if overused. Too much inotropic stimulation may over contract the ventricle and not allow proper diastolic filling. With increased myocardial contraction more blood will be ejected into the systemic circulation but also more blood will be shunted through the defect, increasing the lung flooding. Diastolic filling times may become insufficient with high heart rates and myocardial oxygen demand will increase.

Dobutamine also has β2 receptor action, unlike adrenaline or dopamine. β2 stimulation causes peripheral vasodilation, reduces ventricle afterload and improves stroke volume. This will help to improve systemic under-circulation without causing too many unwanted effects. Adrenaline infusion is only used with severe shock, preferably in an ICU setting.

Too high inotropic doses have been shown to cause myocardial damage in infants. The key is gentle inotropic support.

Optimise the haemoglobin (Hb) to ensure adequate oxygen-carrying capacity to the peripheral tissues. Aim to keep Hb >10 g/dl in children and >12 g/dl in neonates. Consider adding folate with chronic anaemia or iron and deworming in cases of microcytic anaemia.

Parental education on infection prevention, nutrition and routine immunisation should be stressed at every consultation. Influenza vaccination should be given before the influenza season. There is ongoing controversy regarding the cost-benefit ratio of monoclonal RSV antibody (palivizumab) prophylaxis in congenital cardiac lesions. Dental hygiene should be maintained to limit the risk of endocarditis and parents should be educated on endocarditis prophylaxis.

The heart and lungs cannot be seen as separate entities in cardiac shunt lesions. Blood flow should be balanced between the pulmonary and systemic circulations. Medical treatment of large cardiac shunt lesions should be aimed at lung diuresis, nutritional support and infection prevention. Early surgical correction is needed before irreversible PHT develops.

• Infants presenting with a wheezy chest and respiratory distress should be assessed for congenital heart lesions as part of the differential diagnosis.

• Oxygen should be used with caution to avoid increasing the pulmonary flooding.

• Gentle inotropic support should be used when perfusion is poor. Refrain from high-dose inotropic use.

• Attention should be given to nutritional support to all children with cardiac shunts.