This is the second in our series of clinical articles that discuss everyday presentations. Each emphasises practical aspects of team-based care that are relevant for general practitioners, specialists and paramedical professionals. Disorders arising in blood and bone marrow result in some of the commonest presenting symptoms and signs. A careful history and physical examination, complemented by rational use of laboratory tests, provides the clinical basis for a working diagnosis. If further investigation is needed into bone marrow or plasma, then supplementary imaging and radionuclide technology may be necessary under the guidance of an experienced haematologist.

These clinical syndromes occur commonly in everyday practice and have variable and often subtle manifestations. The myelodysplasias are a heterogeneous group of malignant stem cell disorders that differ widely in haematological presentation and natural history. The characteristic features are:

• a variable risk of transformation to acute leukaemia.

These neoplasms may arise de novo or after exposure to potentially mutagenic therapy. They are more common in older adults, but are increasingly recognised in children or young adults. Affected individuals are often underdiagnosed and may be treated inappropriately or unnecessarily. This is avoidable given current, and improving, understanding of these fluid-phase tumours.

More than 50 years ago cases of anaemia that did not respond to available therapy were recognised, of which about two-thirds defied diagnosis. Shortly thereafter some cases of refractory cytopenia were noted to develop into leukaemia, giving rise to the term pre-leukaemia. It was, however, not until 1970 that a classification was attempted, which was refined in 1976 by European, American and British investigators (Table 1).1

This was the initial approach to providing unification of these heterogeneous stem cell disorders. Ringed sideroblasts exceeding 15% of nucleated erythroid series classically in RARS but variably present in CMML and RAEB.

Subtypes with an excess of primitive marrow precursors have a higher transformation rate to acute leukaemia; this is a feature noted also in chronic myelomonocytic variants. Systematic research has resulted in the current recommendations from the World Health Organization that focus on the number of leukaemic blasts in the marrow and associated cytogenetic abnormalities (Table 2).2 , 3

Initially in 2001 the World Health Organization proposed an update that largely replaced the earlier classification. This has undergone extensive review and represents a worldwide consensus for approaching haematological neoplasms.

These features are combined in an international scoring system that has predictive value for survival (Table 3).4 However, in addition to disease status, there is recent recognition that non-leukaemic deaths may reflect extra-haematological co-morbidity and independently worsen survival patterns. This is particularly so in older patients and should be explained to the patient and the family (Table 4).5

This is currently unknown, but males predominate with a median age of 65 years and incidence increases with increasing age.

Genetic factors may have a role in predisposition resulting from genes or polymorphic variants which increase the possibility of developing these entities. There may be a link with marrow injury and possible oxidative stress that accumulates with age, which may lead to mitochondrial damage with mutations in DNA. However, this is controversial.

An association with environmental or occupational factors is documented in relatively large case-control studies, but there is no proof of causation. Possible risk factors are tobacco smoking, alcohol, pesticides and a range of organic solvents. Better recognised correlations are the late consequences of cytotoxic chemotherapy and ionising radiation with both high and low concentration of exposure to benzene injurious via marrow damage. Notable is the occurrence after stem cell transplantation and in the course of aplastic anaemia, paroxysmal nocturnal haemoglobinuria and the chronic myeloproliferative syndrome neoplasms.

Children are increasingly recognised as having these disorders, particularly in the setting of Fanconi anaemia, ataxia telangiectasia and Bloom’s syndrome. Juvenile myelomonocytic leukaemia and the monosomy-7 syndrome are relatively common; therefore the index of suspicion must be high when faced with otherwise unexplained signs and haematological abnormalities.3

Anaemia is present in more than three-quarters of cases and is often symptomatic because of falling haemoglobin levels and coexisting cardiac and respiratory conditions. Erythropoiesis is ineffective and may be compounded by autoimmune haemolysis or pure red cell aplasia. Iron overload frequently occurs as a result of transfusions and increased absorption leading to hepatic, cardiac and endocrine dysfunction.

Thrombocytopenia occurs in more than half of the patients and explains easy bruising and inappropriate mucocutaneous bleeding (Fig. 1). This may be more severe and even lethal in 10 - 15% of cases, particularly in patients who have a poor prognosis according to the international scoring index. 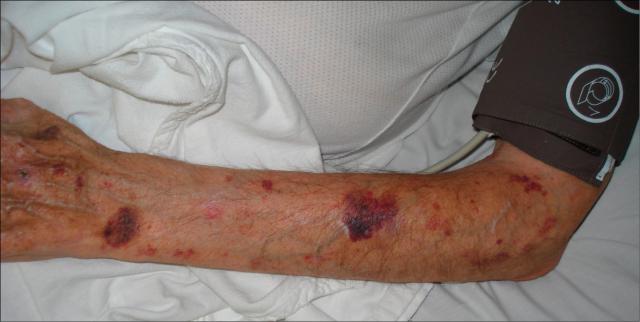 Neutropenic bacterial sepsis, exacerbated by granulocyte dysfunction, responds poorly to standard therapy and remains a major cause of death in 20 - 40% of individuals.

Cell morphology is similar to that in nutritional deficiencies such as vitamin B12 and folate deficiency, so a careful diagnostic algorithm is vital. 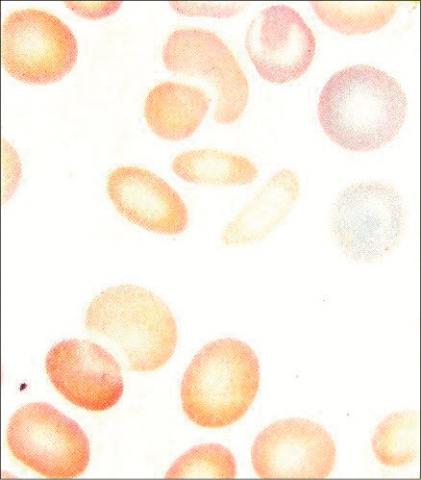 Fig. 2. Dimorphic red cell population. Large and typically oval erythrocytes may, on occasion, include polychromasia, although this feature which reflects the presence of reticulocytes is not usual. Characteristically, a smaller and more normal-appearing population co-exists, but such dimorphism is not uniformly present.


In the hypercellular marrow dyserythropoiesis is recognised by abnormal nuclear lobulation, irregular cytoplasmic haemoglobinisation together with basophilic stippling. An appropriate iron stain is needed to demonstrate the distinctive and diagnostically important ringed sideroblasts (Fig. 3). 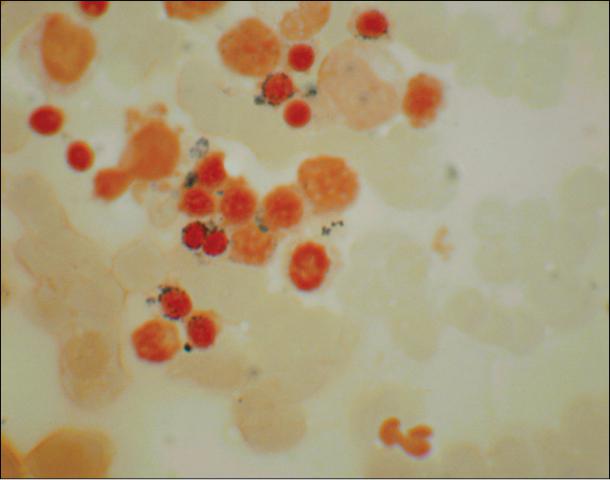 White cells show morphological dysplasia in the form of poor granule formation in the cytoplasm and hyper- or hypo-lobulation of the nucleus (Fig. 4), often resulting in the typical pseudo-Pelger-Huët anomaly. A minimum of 10% dysplastic cells for each lineage is necessary to confidently diagnose these disorders. Monocytes are increased and there are also distinctively abnormal nuclei. A careful cell count is mandatory to record numbers and variations in the leukaemic blast population.

Platelets are typically reduced, although large forms and considerable variation in size are seen. In the trephine biopsy the increased numbers and small size of megakaryocytes, generally mononuclear, are characteristic (Fig. 5). It is important to recognise variants in which fibrous tissue is increased and, conversely, total cellularity is decreased, differentiating from primary myelofibrosis and aplasia respectively. 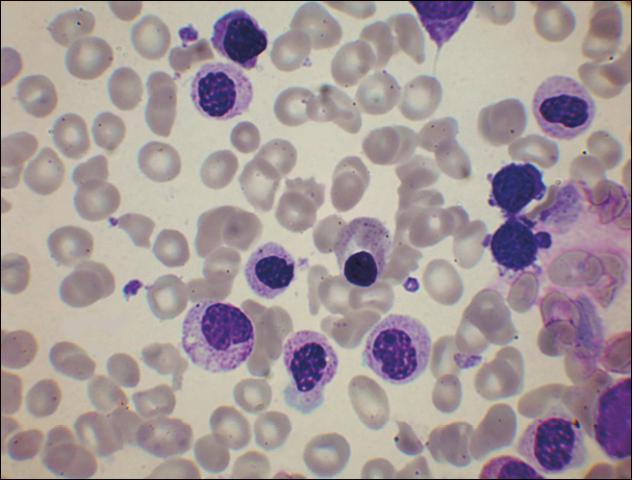 Fig. 4. The dysplastic granulocyte series. Mononuclear, hypogranular neutrophils and pseudo-Pelger-Huët variants with coarse chromatin. These distinctive cytological features are often the initial clue to diagnosis when the well-prepared and suitably stained blood film is examined. 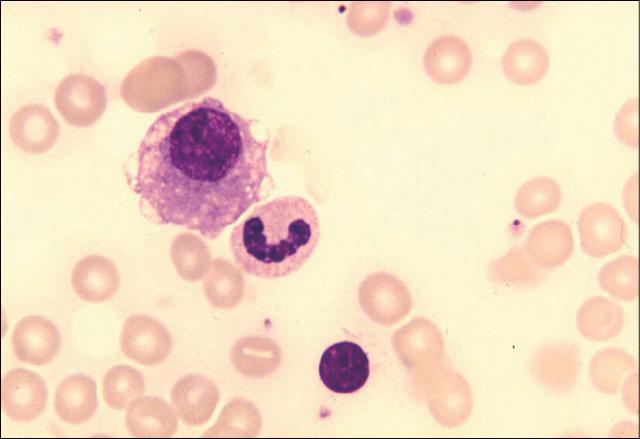 Fig. 5. Megakaryocyte dysplasia. In the marrow these typically very large cells become small and often mononuclear. The same features are often easier to appreciate in a trephine biopsy and virtually diagnostic to the experienced morphologist.

Unexplained cytopenia, particularly in the elderly and when accompanied by monocytosis, requires a meticulous history aimed at excluding viral infections and nutritional deprivation.

Relatively insignificant bruising and bleeding, unexplained and recurrent infections as well as a broad range of autoimmune manifestations add to the difficulties in recognising this possibility in otherwise well individuals.

However, once considered, the cytomorphology in the peripheral blood and bone marrow is a reliable diagnostic starting point for an experienced haematologist. Vitamin B12 and folate deficiency, toxins, particularly including alcohol and a wide range of medications, as well as HIV infection, need to be excluded. The diagnosis is confirmed by flow cytometry and molecular genetics using fluorescent in situ hybridisation and conventional metaphase karyotyping. This information secures the diagnosis and classification as a basis for risk-stratified treatment using the international prognostic scoring system (Table 3).4 The possible effects of any non-haemopoietic comorbidity also need to be discussed with the patient (Table 4).5

Molecular genetics is now an important part of haematology. In the elderly, management needs to take comorbidity into account.6

Risk stratification based on both disease status and extra-haematological comorbidity in patients with myelodysplastic syndrome.

These patients need to be treated only in a properly structured, experienced and effectively functioning multidisciplinary group in a major centre. Therapy should be individualised, based on risk stratification and, where possible, clinical trials.4 , 7

First determine if treatment is necessary, or in an asymptomatic patient decide whether or not a conservative approach is appropriate. Standard supportive care is suitable in all those with a confirmed diagnosis. This is defined as red cell transfusion if symptomatic anaemia is present, with iron chelation, culture-directed antibiotics for documented infection and platelets. There may also be benefit in the simultaneous use of an antifibrinolytic agent such as cyclokapron.

Erythropoietin or similar agents are given, possibly combined with granulocyte stimulating peptides, independent of plasma levels. An adequate trial of therapy is important, probably not for less than 6 months. Thrombopoietin analogues, particularly romiplostim, may be useful.

Where more aggressive intervention is indicated those in the 5q category are treated with lenalidomide.6 , 7 The remainder are risk stratified by score on the IPSS.4 Selected cases with bone marrow failure, rather than leukaemia and particularly when HLA-D 15 positive, may respond to immunosuppression including anti-lymphocyte globulin. This treatment carries risks of infection and infusion-related side-effects that should not be underestimated.7

Persisting symptoms raise the possibility of allogeneic immunohaematopoietic stem cell transplantation if clinically appropriate and if a donor is available.8

In individuals eligible for this intervention it is still uncertain whether fully myeloablative or reduced intensity preparation, also known as conditioning, should be undertaken first. The benefits of diminishing leukaemic blast count before this procedure are still being debated. The debate is whether such chemotherapy can delay or prevent subsequent disease recurrence. Choice of donor, including possible umbilical cord units, is also under debate.

In those disqualified from this option the low-risk category may qualify for lenalidomide, while more aggressive disease is amenable to DNA methyltransferase inhibition. This approach, together with either newer histone deacetylase agents such as a specific inhibitor, promotes the transcription of genes whose expression has been silenced – the epigenetic approach, which is being investigated by a number of cancer research centres worldwide.5

These syndromes are increasingly recognised. It is important that early and accurate diagnosis, with proper risk stratification, is the first step in management.

This crucial initial evaluation is the basis for a carefully defined proactive therapeutic algorithm designed to use all the available resources in an appropriate sequence and setting. It is no longer appropriate to manage these patients outside a comprehensive specialist group that accepts responsibility for all-inclusive care.

Acknowledgements. Supported by the Haematological Research Trust, with grants from the Louis Shill Foundation. Christine Dölling helped with the bibliographical review and Natasha Gordon typed the manuscript: appreciation is expressed to our research assistants. The photomicrographs are published with the permission of Professor Barbara Bain, who retains the copyright for them.