Bruce Spottiswoode has a BSc in Electrical Engineering from the University of the Witwatersrand and a PhD in Biomedical Engineering on cardiac MRI from the University of Cape Town. He has worked on developing electronics for the CSIR, on MRI image reconstruction for Siemens, and on X-ray imaging for Lodox Systems. He is currently the Director of the Cape Universities Brain Imaging Centre. His current fields of interest are cardiovascular and neuro-magnetic resonance imaging.

Cardiovascular magnetic resonance imaging (CMR) technology has advanced significantly over the past two decades, and the modality is now being used routinely in radiological investigations. CMR is frequently referred to a ‘one-stop shop’ for diagnosis as it provides more combined information about cardiac viability, morphology and function than any other imaging modality.

This paper describes the basic principles of CMR and outlines a standard CMR investigation. This is followed by an overview of the variety of established CMR capabilities available.

Magnetic resonance imaging (MRI) is renowned for its ability to distinguish between soft-tissue types. It is also non-invasive and it does not involve ionising radiation or radioactive compounds. An MRI image is created by placing the patient in a large magnetic field and using radio waves to perturb free hydrogen protons which have aligned themselves with the magnetic field. These protons then give off radio waves, which are picked up by a receiver. An image is obtained using a series of radio waves and magnetic field gradients. The signal given off by the protons can be divided into several components (T1, T2, and T2*) which are unique to the tissue being imaged. It is these components that are used to create images with differing image intensity contrasts between tissue types, a concept known as image weighting. This is demonstrated in Fig. 1, which shows images of the same transverse slice of a human brain obtained using three different image weighting techniques. The contrast between grey matter, white matter and cerebrospinal fluid is different in each image.

Structural MRI images of stationary organs are typically constructed over tens of seconds or several minutes by scanning line-by-line, analogous to an inkjet printer. Although commercial MRI scanners have been available for imaging stationary organs for almost 30 years, the technology for cardiac imaging has taken longer to develop because of the challenges involved in imaging a moving organ using a relatively slow imaging modality.

Imaging the beating heart is typically achieved by synchronising the MRI scan with the QRS complex from an electrocardiogram (ECG) trace. This is known as ECG gating, and it is illustrated in Fig. 2. Here, an image of the heart at a particular time point in the cardiac cycle is pieced together from data collected over several heart beats. By combining the images obtained at multiple time points in the cardiac cycle, a movie or cine series is created, portraying the heart beating as if the images were acquired in a single cardiac cycle. In practice, the scan time for this procedure is 10 about seconds, and the patient is asked to hold his/her breath during the scan to minimise respiratory motion artefacts. In cases where the patient is unable to hold his/her breath, respiratory gating can also be incorporated, either using a belt around the abdomen or by monitoring the liver-lung interface during the MRI scan.

Balanced steady-state free precession (bSSFP) is the most common MRI technique for cine imaging. Modern MRI scanners also provide tools for real-time cardiac imaging, where accelerated imaging techniques are used to capture lower resolution cardiac images without ECG gating and during free breathing.1 In addition to the standard transverse, sagittal and coronal imaging planes, a number of standard cardiac-specific imaging planes are typically used. These are broadly divided into short-axis and long-axis views, as shown in Fig. 3.

An MRI sequence is an MRI technique used to highlight a particular feature or function, and involves a series of applied magnetic field gradients and radio waves. For example, as shown in Fig. 4, these MRI sequences may include features for suppressing blood or fat, which can respectively be used to more clearly distinguish the endocardial boundaries, or to identify fatty deposits.

• a short axis ‘stack’ of cine bSSFP images to assess myocardial function; about a dozen slices are acquired, spanning the entire heart from the base to the apex

• short- and long-axis T2-weighted images may be added for distinguishing oedema.

Depending on the clinical query, additional CMR sequences can be added to assess other characteristics such as myocardial perfusion, valvular function, blood flow, vessel anatomy, and myocardial deformation. The operation and interpretation of these sequences will be explained in the following sections.

A notable strength of CMR is in imaging myocardial viability, where it is a close rival to the current gold standard fluorodeoxyglucose positron emission tomography (FDG-PET). A gadolinium-based contrast agent (gadolinium-DTPA), which increases the signal intensity in MRI images, is administered intravenously. By imaging the heart immediately after administering the contrast, and monitoring the regional myocardial signal intensity over time, maps of myocardial perfusion can be obtained.2 These can be used to assess the significance of coronary artery disease and microvascular dysfunction within the myocardium. The gadolinium remains in infarcted tissue long after it washes out of the surrounding normal myocardium, and by obtaining images about 10 minutes after the injection, the location of the fibrosis becomes immediately apparent. This is known as delayed-enhancement imaging. 3 A striking way of portraying delayed enhancement is using inversion recovery sequences that null myocardial tissue and thus enhance the contrast of the damaged tissue. Fig. 5 shows a series of clinical examples of inversion recovery delayed-enhancement MRI.

MRI provides unparalleled tissue contrast and is key in diagnosing cardiomyopathies, tumours and infiltration. For example, MRI is capable of distinguishing between constrictive pericarditis and restrictive cardiomyopathy, as pericardial thickness can be measured and pericardial effusions are clearly visible. Fig. 6 shows a few clinical examples of the strengths of CMR for tissue classification.

Contrast-enhanced MRI angiography (CE-MRA) can be performed to give an indication of the morphology of the great vessels. Here a rapid series of images are acquired during the transit time of the contrast agent. Fig. 7a shows a typical CE-MRA, which is acquired without ECG gating and portrayed as a maximum-intensity image, where only the high signal from the contrast agent is shown. Recent rapid imaging techniques allow for time-resolved MRA (TR-MRA),5 which is done using ECG gating. This can, for example, show the blood within the cardiac chambers, as illustrated during diastole and systole in Figs 7b and 7c, respectively.

The stack of short-axis cine bSSFP images covering the entire heart can be used to quantify a number of useful clinical indicators of cardiac function. Modern post processing software can demarcate the borders of the endocardium and epicardium, as shown in Fig. 8. These can then be used to extract parameters such as ejection fraction, stroke volume, myocardial mass, and regional wall thickening. Controlled doses of dobutamine can also be administered to investigate wall motion abnormalities during stress.6

CMR can also be used to evaluate aspects of valvular heart disease.7 Valvular function can, for example, be observed in cine gradient echo images. Fig. 9 shows the mitral valve leaflets during ventricular diastole (black arrows). Turbulent flow reduces the synchronicity of the protons being imaged and results in signal loss. A turbulent jet from an aortic valve regurgitation is evident in Fig. 9 as a characteristic dark streak in the otherwise bright blood (white arrow). This is commonly known as a flow void.

Phase contrast velocity encoded MRI allows one to obtain measures of blood velocity plotted over the cardiac cycle through the valves and the great vessels.8 This affords quantitative measures of blood flow which can, for example, be used to estimate the ejected blood volume during systole, or capture flow profiles proximal and distal to a stenosis. Newer scan techniques measure blood flow in multiple slices and in three directions.9 Fig. 10 shows an example of how these data can be used for assessing blood flow in the aorta.

Several techniques exist to provide quantitative measures of intramyocardial function. The phase contrast velocity encoding technique can also be used for myocardial tissue velocity mapping.10 MRI myocardial tagging is another technique where the signal in the myocardium is destroyed in a series of dark bands or tags, which are a material property of the tissue and can be seen to deform as the heart moves. Figs 11a and 11b show an example of MRI tagging at end diastole and end systole, respectively. Tagged images provide insight into contracti-lity and myocardial mechanics, and can be processed to yield meaningful measures of myocardial strain.11

Displacement encoding with stimulated echoes (DENSE) MRI is a related technique which provides more accurate measures of myocardial displacement and strain.12 Fig. 11c shows an infarcted region (arrow) from a delayed enhancement sequence, and Fig. 11d, derived from DENSE MRI data, shows the corresponding motion trajectories from end-diastole to end-systole (purple lines) and regional deformation/strain at end-systole (blue and yellow). The healthy tissue exhibits a strong contraction (blue) and the region of poor contractility (yellow) corresponds to the location of the fibrosis.

Although MRI coronary imaging has improved considerably over the past years, resulting in techniques such as volume imaging with respiratory navigator tagging, multidetector computed tomography (CT) is still the gold standard for coronary angiography. However, because thickening of the vessel wall precedes luminal narrowing, MRI has the ability to detect early coronary atherosclerosis.13

CMR is an established technique, which can be considered a one-stop shop for assessing cardiac pathology. However, it also has several limitations, including the high cost of the MRI scans, the fact that many patients with implantable cardiac devices cannot be scanned, and the limited use in patients with arrhythmias. In addition, there have been a few reactions to the gadolinium contrast agent and there is evidence to suggest a link to nephrogenic systemic fibrosis. Despite these shortfalls, CMR is a valuable problem-solving tool and currently the best single imaging modality for assessing myocardial viability and function. 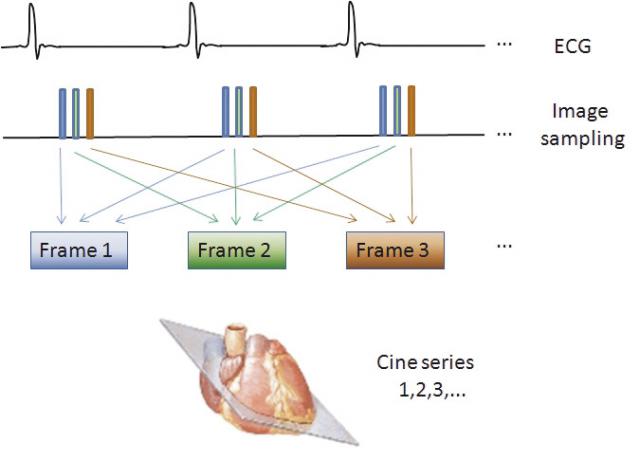 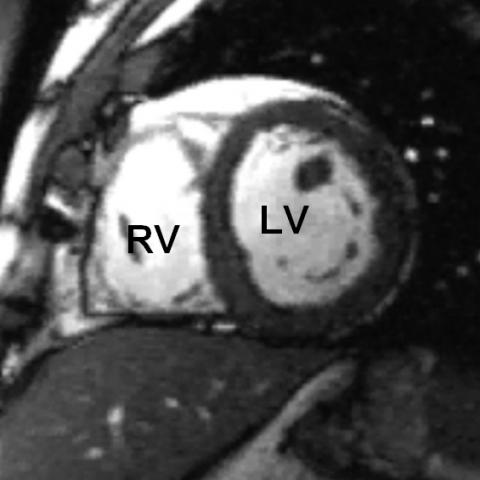 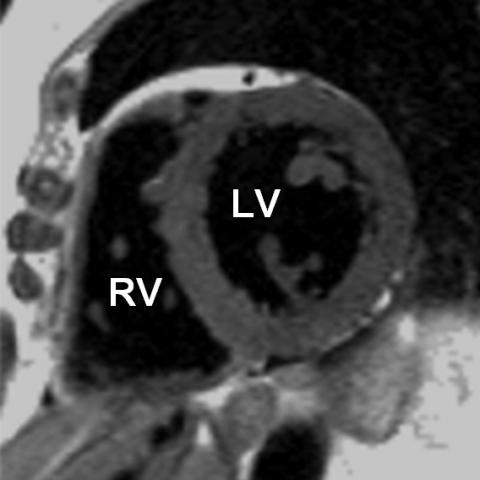 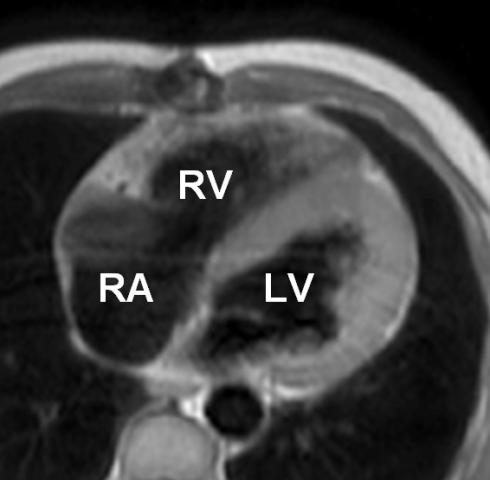 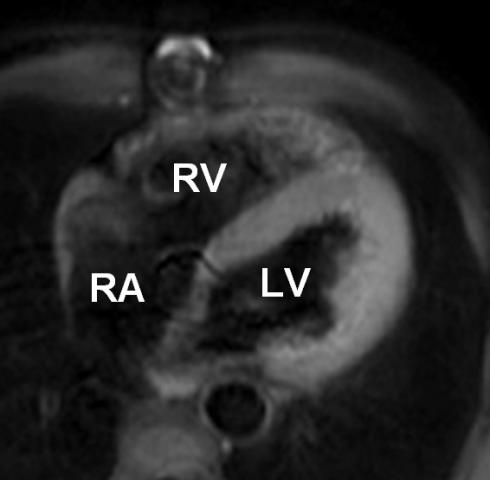 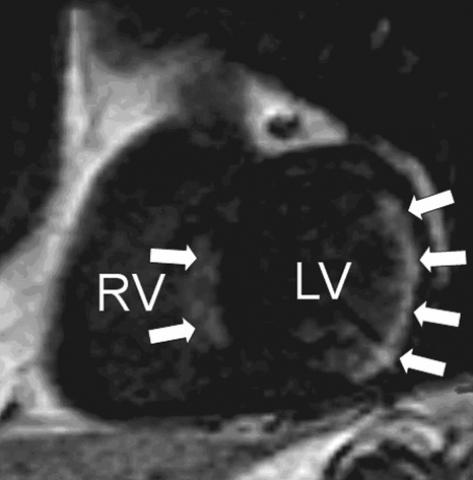 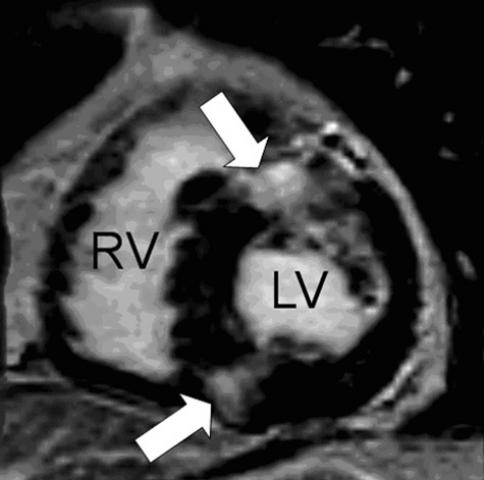 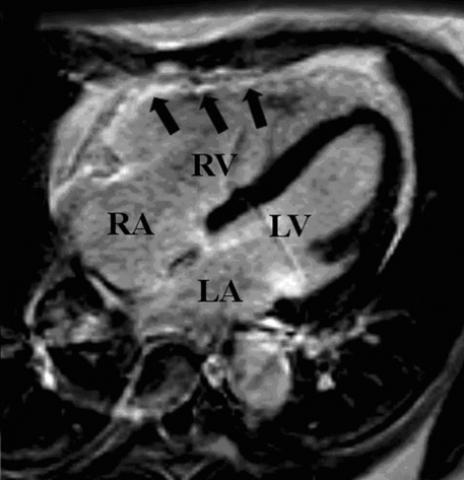 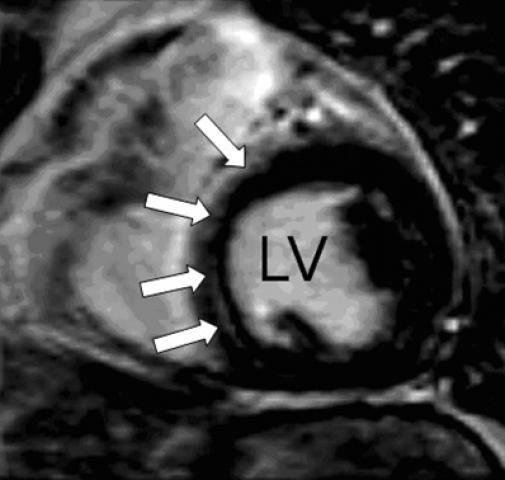 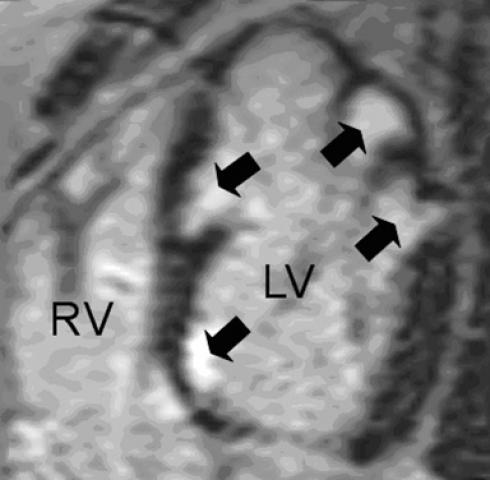 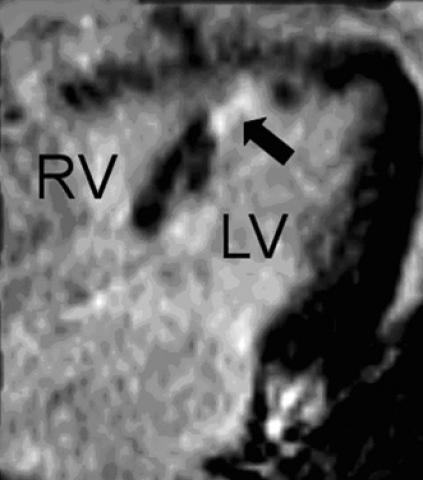 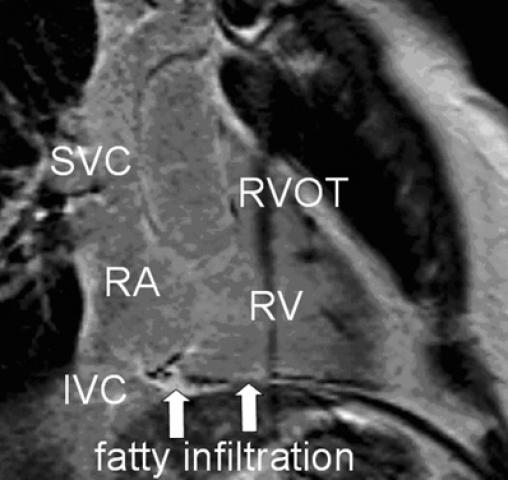 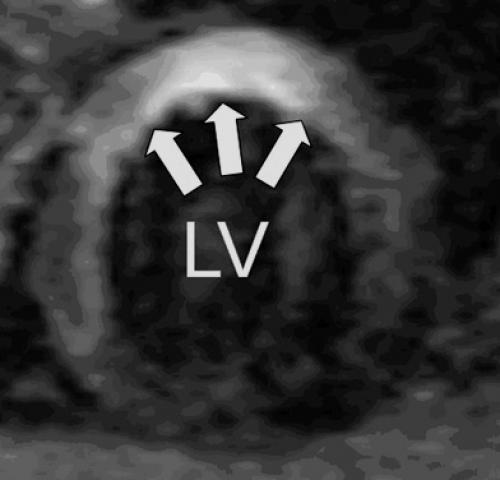 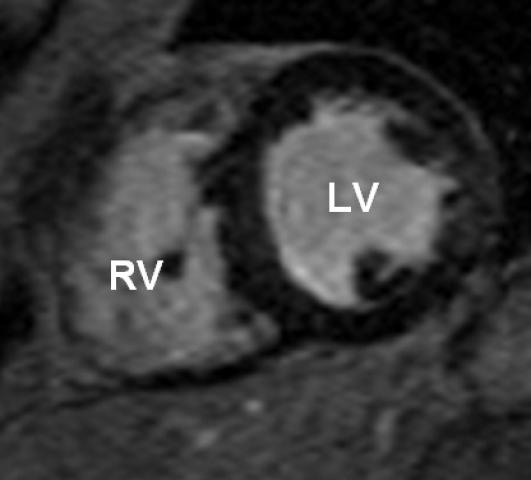 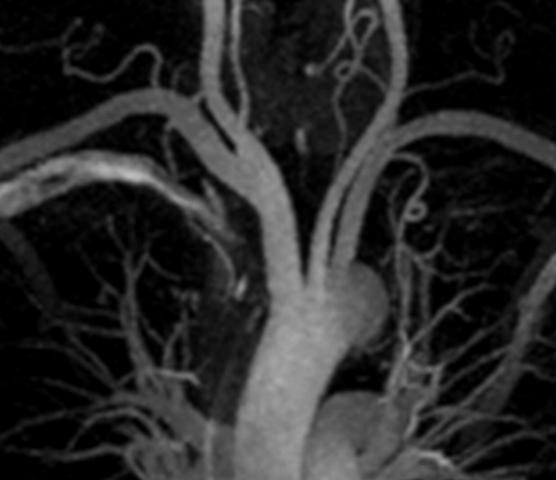 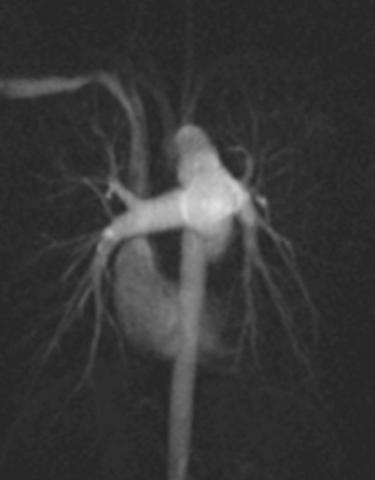 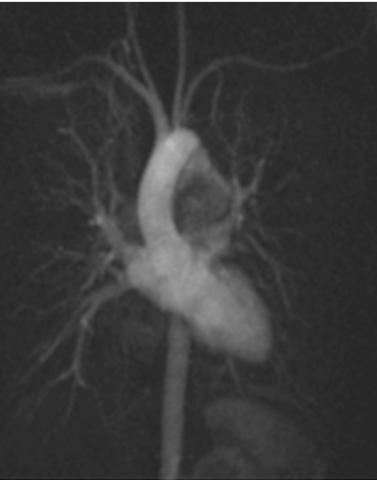 Fig. 7. Contrast magnetic resonance angiograms: (a) a maximum intensity projection showing the great vessels; (b) and (c) show two frames of a dynamic MRA during diastole and systole, respectively. 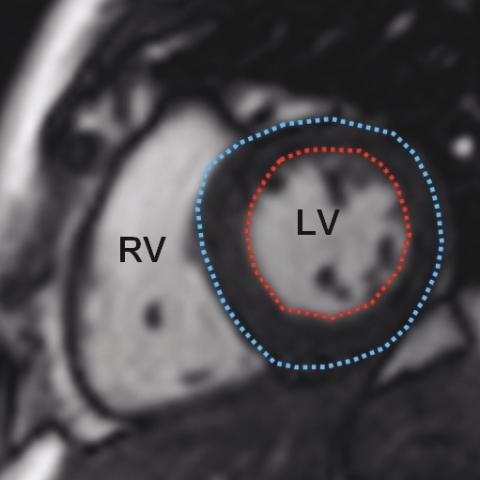 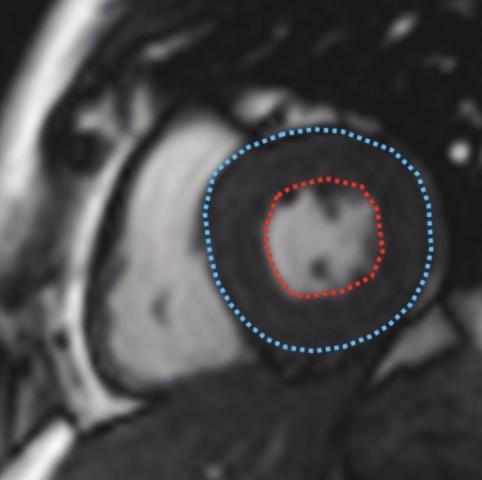 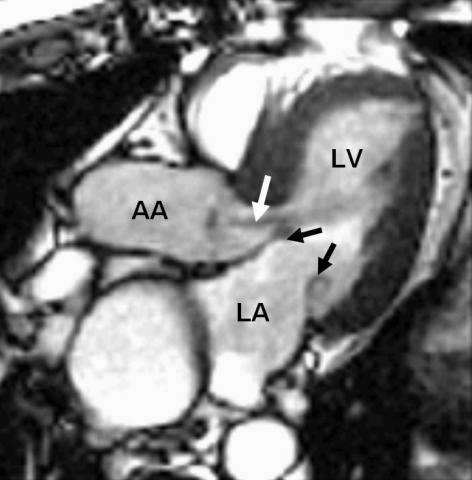 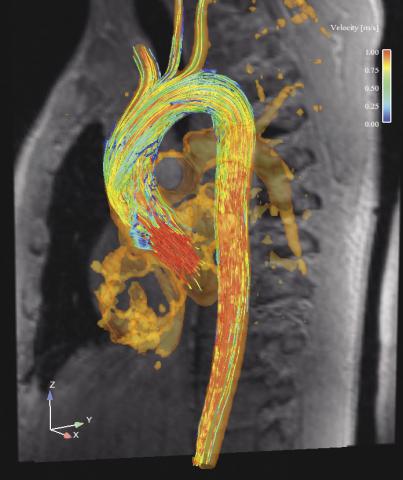 Fig. 10. Imaging a volume with velocity measurements in three directions allows for retrospective particle tracking, where simulated blood particle are projected along the velocity fields. The image shows blood being ejected from the left ventricle and travelling along the aorta. The colour represents the blood velocity. Image courtesy of Dr Michael Markl. 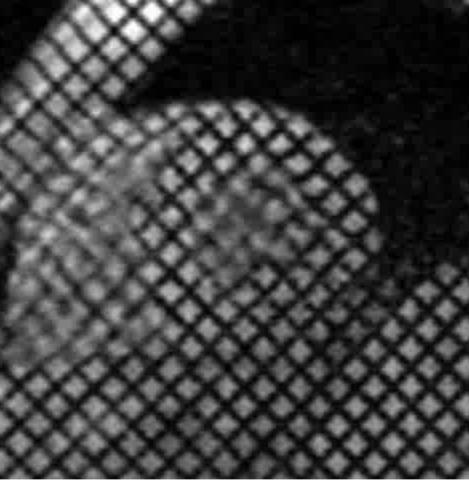 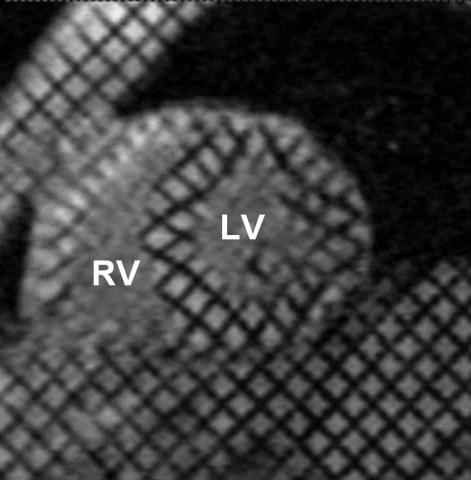 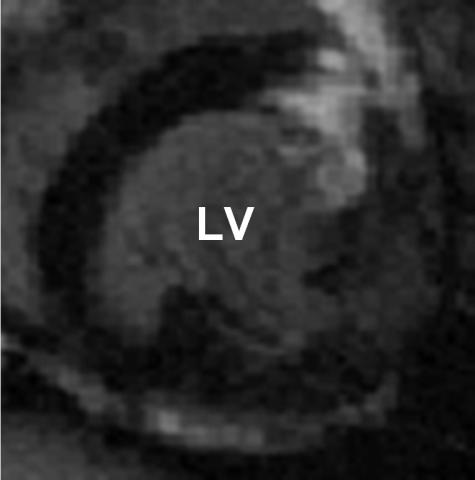 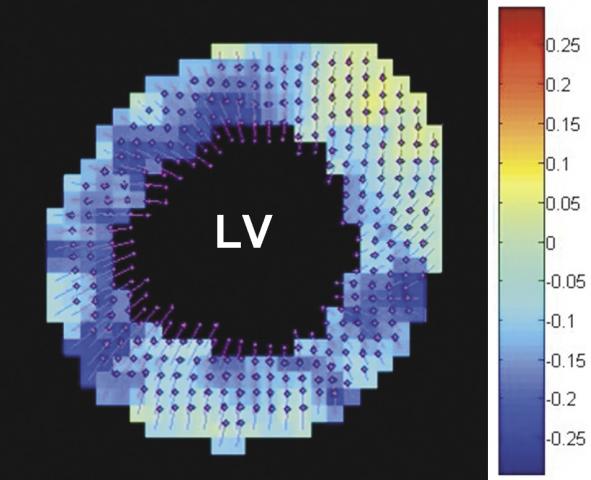 Fig. 11. Examples of regional myocardial tissue tracking and deformation mapping using myocardial tagging and DENSE. (a) Myocardial tagging at end-diastole, and (b) the deformed tags at end-systole. The deformation of the tag lines gives an indication of the intramyocardial mechanics. (c) Delayed enhancement showing an infarct, and (d) DENSE tissue tracking (purple lines) and the corresponding strain map showing normal tissue with a negative strain (blue) and the fibrotic region with a zero or slightly positive strain (yellow). LV = left ventricle; RV = right ventricle.

• Cardiovascular MRI, or CMR, is a versatile one-stop shop for the diagnosis of cardiac pathology.

• CMR provides both morphological and functional information about the heart.

• CMR is non-invasive and it does not involve ionising radiation or radioactive substances.

• A gadolinium contrast agent can be used to assess myocardial viability, to measure myocardial perfusion, and to create angiograms.

• CMR can be used to evaluate aspects of valvular heart disease, such as the structure of a valve and whether or not the valve is incompetent.

• A collection of cine images can be used to extract clinically useful parameters such as ejection fraction, stroke volume, myocardial mass, and regional wall thickening.

• The inability to depict detailed coronary artery anatomy is currently a major shortcoming of CMR.